Yesterday while Googling someone’s callsign I stumbled upon QRZCQ.com, a new amateur radio portal. You’re probably saying right now “Great, yet another website trying to be like the ‘Zed.”  Indeed, it is trying to be yet another QRZ.com, but unlike others who have tried, this one appears to have gotten it right.

At first glance, the site is very visually appealing.  Unlike other sites it looks like it was designed in this century, with nice colors and fonts, everything ties together visually, and there appears to be use of “Web 2.0” technology.  QRZCQ features a callsign database, with user editable profiles.  There’s a DX cluster area that is very well designed with filtering capability.  The Forums page is a bit basic, but I like the threaded conversations.  It doesn’t appear that forums are the center of attention on this site like it is on other portals, another good move in my opinion.  QRZCQ’s Swapmeet area doesn’t have a lot of equipment for sale yet, but I like the layout of the ads.  Hopefully this design will scale well as the volume increases.

The site has other features one would expect such as chat, videos, a resources area, and a “Stream” page that shows user activity on the site.  The site is free, however they will be offering premium subscriptions, they just lack a payment system at this point.  Premium subscribers will have more DX cluster filtering functionality, be able to author articles and news stories, create and manage chatrooms, and have additional functionality in other areas.  There are currently no banner ads on the site. 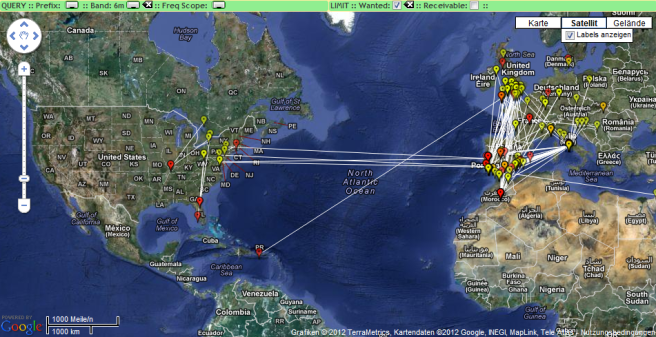 One feature I really like is the DX cluster map.  It’s like the venerable VHFDX.info cluster maps, which have been having a lot of service problems recently and is down as I type this.  QRZCQ’s cluster map is based on Google maps, so you have your choice of maps and the familiar Google maps controls and navigation.  I may start using this more regularly if it refreshes well and is reliable.

QRZCQ.com launched earlier in the year (general free memberships opened in April), and the site seems to have a decent number of users as it doesn’t have that struggling new portal site feel.  The audience is very international as the Users Online feature shows.  All in all, this looks like a wonderful resource for amateur radio that is well thought out and will be useful in day to day operation.  I plan to use it extensively and I would recommend all radio artisans to check it out.

View all posts by radioartisan